Our presentation topic was as follows: 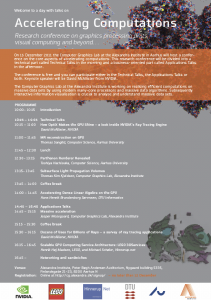 As LEGO is moving into the virtual playspace, a platform technology has been developed in-house primarily based on NVIDIA technologies, featuring:

The LEGO 3DServices system is designed to support diverse computational needs such as on-demand rendering, mesh optimisation, a Massive Multiplayer Online Game (MMO), product visualisations, 3D modeling and other current and future demanding computational tasks. Our aim with this session is to share our learnings and present LEGO’s vision of the future of distributed GPU accelerated computation as a business-driven platform technology.